What's a GIF? (and why you should use one)

I have been using GIFs more and more in my classes. I only learned about these this school year from the huge number that people share them on Google+.  The example below was playing in the background while my students were doing a lab investigating how the rate of evaporation affected crystal growth.


What is a GIF?
GIF's are an acronym for "Graphic Interchange Format" which are compressed and don't require playing, as they're running continuously. The "G" is actually pronounced with a "J" sound so it sounds like "JIF", the peanut butter. If you've seen Harry Potter films, they're a lot like the paintings in the "grand staircase" which are constantly moving in animation as students pass by. Unlike other web 2.0 tools like "youtube" which require the user to press play, pause, and replay, GIFs are cyclical "loops" constantly playing. What I like about GIF's is that they focus on a key part of video content and play it over and over. With most videos on youtube or vimeo, the highlight may only be a few seconds and you will have to back up to watch it again. Recently, I have liked to use them playing in the background during certain activities for visual cues or reinforcement. Seeing a GIF animation play over and over again may become a bit repetitious, so I usually change them up once or twice during a lesson. I've also embedded them into our Moodle site for outside assignments.

Where Can I find GIFs?
My "go to" site is Giphy. Giphy has a great assortment of media, although most of them are for social media use. Another is Gifbin. There are a lot of educators sharing GIFs on Google +, so connect to see what everyone is sharing!
Labels: GIF Giphy 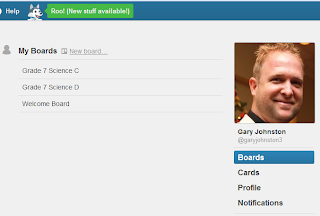